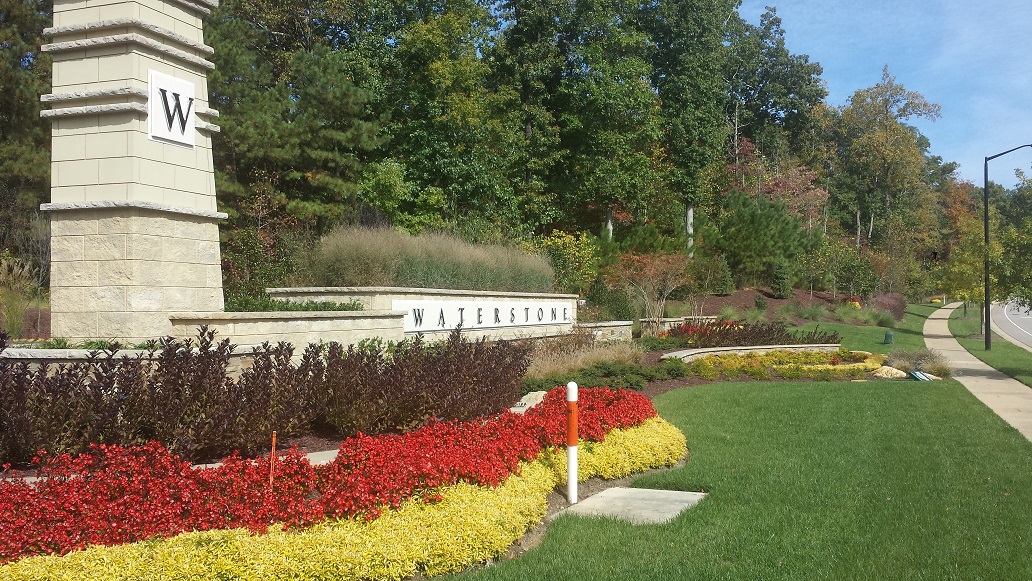 We are taking a different approach today at the blog and checking in with the Town of Hillsborough, the only local government to-date that has used Special Assessment Revenue Bonds as part of the new authority authorized in 2008 (and set to expire in 2015). Often, the “first adopter” ends up having to create new processes to implement a program, rather than working from a path someone else has laid. This blog post will highlight the Town of Hillsborough’s work with the Waterstone Development District to see how things are going a year after the bonds were issued. We also engaged in some amateur photography and videography of the development that we hope you enjoy as well. Thanks to several Town of Hillsborough officials for talking about the project with us: Finance Officer Heidi Lamay, Planning Director Margaret Hauth, and Town Attorney Bob Hornik.

The Town of Hillsborough approved Waterstone in 2004 as a commercial and residential development, but Waterstone stalled due to the financial downturn that began in 2008 (read more about the background at the CED Blog’s great series, here, here, and here). Eventually the Town and property owner Stratford Land reconfigured their development plan to shift uses around within the 330 acres of of the development. Included in the development are Waterstone Estates, a single family neighborhood with 139 homes, Waterstone Terraces, a townhome neighborhood with 114 units, the Orange County Campus of Durham Tech Community College, the Little School (a local daycare/pre-school), and the Hillsborough Campus for UNC Hospital. Hauth has also said that an apartment complex consisting of 270 units was just approved and permitted.

How much Development Has occurred? Driving around Waterstone, you can see the progress made on the public improvements (make sure to check out the photo gallery below). Area is starting to be cleared for the public park. The roadways are built out, as are other improvements. One year in, much of the infrastructure has already been laid. “We’ve spent about $1.8 million so far from the bond proceeds,” Lamay said. “It’s an important area to develop and the structure is great because the Town helped facilitate the development without creating an additional liability for the Town,” she said.

One other key to the early success is a unified, simple message to potential investors and buyers about the special assessment on each property. Hauth said that it was very helpful to get the message out about pre-payment options, the length of the assessment, and the general nature of a special assessment as a fee on a particular area for public improvements.

What are the Main Implementation Issues?

“For us, we did not have a precedent for how to account for the special assessments, so it was a little tricky at first,” Lamay said. “We had to have several conversations about this with our auditor about how we should report the special assessment revenues. We had to create a separate fund for capturing these revenues. We had to explain to our auditor that we are just a fiduciary of these funds, and that the special assessment revenue bonds did not create a liability on our books,” Lamay said. “We also had to figure out the flow-of-funds with our accounting,” she said. Eventually, after consulting with Lamay, Bob Jessup, and Hornik, the auditors were satisfied with the method of reporting and the Town recently had an audit in June that did not have any additional questions. “It took a lot of time to educate myself on the process, but at the end of the day, this financing method has worked well and we would do it all over again given the choice.”

“We’ve also had great partners who entertained our questions. It’s nice to have partners who support you, even after the transaction has closed,” Lamay said. Your friendly neighborhood bond attorneys blushed a little bit after that quote (as we’re sure the other financial advisors, banks, and other parties did as well). Lamay also indicated that the next local government to use a special assessment revenue bond would likely have an easier time than Hillsborough. “There’s an established practice now. There’s someone to call. Auditors have a deal to look at and to use when making their assessments. Finance officers have someone to call to ask about their flow-of-funds and accounting,” she said.

Town Attorney Hornik had a similar view: “All of the reasons that the Town wanted to use special assessment revenue bonds for this project seem to be playing out. It’s been smooth sailing on my end—it’s been months since I’ve been called and I’ve only had a few minor questions. I think the last time was around July or August as the tax bills were prepared.” Hornik said that most of the work was for the Town to make the decision to go ahead with the special assessment revenue bonds. “Once the Town was convinced that Waterstone would succeed and committed to the project, things have gone well,” he said.

“Waterstone was underwater for six years. Everyone was frustrated,” Hornik said. The Town was in a place where it had to decide whether it wanted to “blaze a new path,” he said. The Town made the choice to use special assessment revenue bonds, and a year later, the project has seen substantial development. “Special assessment revenue bonds are a worthwhile development finance tool—if used properly,” Hornik said. The Town made several decisions to reduce the risk that the project would not succeed and took the step toward developing this critical area in the Town. Congratulations to our friends in Hillsborough for a great first year.