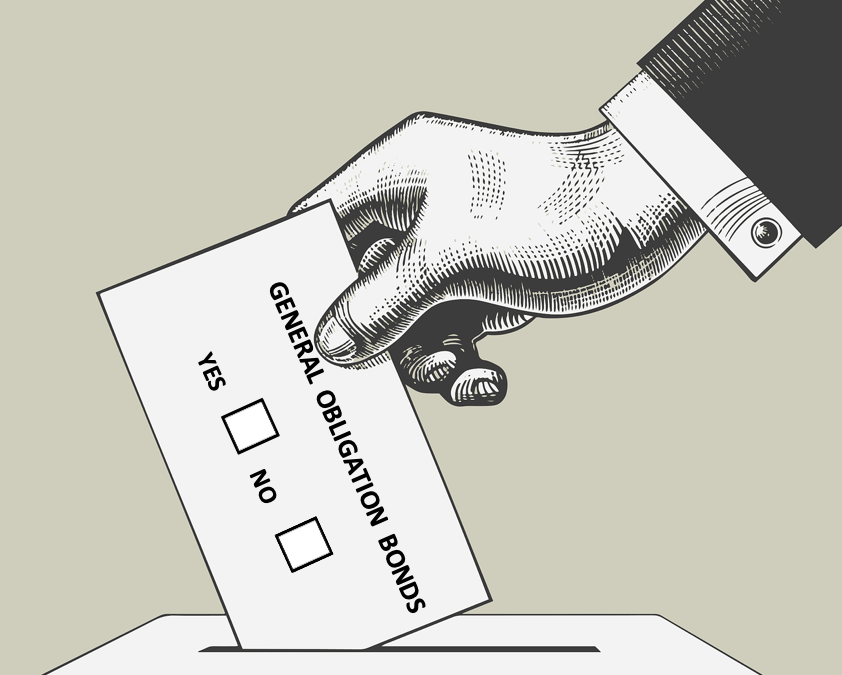 Back in March 2021, members of the North Carolina State Senate sponsored a bill known as “SB 265” and entitled, “Bond Referendum Transparency.” As the title suggests, the bill is part of a recent trend to disseminate information to a voter on a bond referendum beyond just the stated amount of the bonds. Notably, this bill only applies to general obligation bonds (“GO bonds”) that require voter approval. After moving through the Senate, the bill currently sits in the House and has not gained any traction since late spring of 2021. While its passage remains a possibility, this is an opportunity to zero-in on a segment of the bond referendum process.

“Past and Present” (The Disclosure Statement)

In planning for a referendum, the finance officer of a local government unit delivers what is called a “Statement of Estimated Interest.” This statement is an estimate of the total amount of interest that would be paid over the expected term of the bonds. Session Law 2013-200 imposed this requirement (to address this same issue of transparency now), by giving finance officers the added responsibility to approve this statement of estimated interest. In the same law, the terms “plus interest” were put right next to the amount of the bonds on the ballot question (i.e. “Shall the order authorizing $______ bonds plus interest [emphasis added] . . . be approved?”). SB 265 appears to layer a second round of transparency on top of the requirements enacted by the 2013 session law.

The bill then adds a new statutory section altogether (§ 159-55.1), which essentially includes the statement of estimated interest from § 159-55 in a new “disclosure statement.” The disclosure statement, filed by the finance officer before the required public hearing is conducted, must include (i) the estimated interest (along with a summary of the “reasonable” assumptions upon which the estimate is based as noted above), (ii) an estimate in the increase in property taxes, if any, required to pay the debt service and (iii) the amount of the unit’s two-thirds bonds capacity available for the current fiscal year.

Estimating property taxes increases would be a new requirement for finance officers. Even if no increase is expected, the finance officer must include a brief statement that the existing projected revenues are sufficient to cover the principal and interest of the bonds. The current statutes acknowledge that a tax may be levied in order to pay the principal and interest of the bonds, although specifics are not required.

This is problematic in a few ways. The scenarios under the bill to cover debt service do not always fit neatly into either (i) expected sufficient revenues or (ii) a projected tax rate increase. Other factors such as natural growth in the tax base or even revaluation of the existing tax base may sufficiently provide debt service coverage, but are unaccounted for in the bill when neither (i) or (ii) may be true.

The other issue is calculating the debt service itself. Most GO bonds have a payment schedule that is heavily front-loaded per LGC requirements. This unevenness means not all annual payments under debt service are the same and it’s also unclear for which year(s) of bonds we are making estimates. The bill leaves a lot of ambiguity regarding debt service calculations and other important factors affecting debt service coverage. This information is more likely to mislead voters early on in the process rather than inform them.

The statutes and constitution allow local governments to issue new GO bonds, without a vote of the people, in a fiscal year up to two-thirds of the amount of the net general obligation debt retired in the prior fiscal year. This is best shown by example. Let’s say a local government pays down $1.5 million of GO bond principal in in FY1. The locality issues no new GO bonds in FY1. In a nutshell, for FY2, the locality’s two-thirds bonds capacity is $1 million because it retired $1.5 million the previous fiscal year. [For more on two-thirds bonds, see our blog post.]

Markedly, this requirement may be a bit more confusing than the property tax item above. We are looking to authorize bonds for issuance in future years, so it is not necessarily more “transparent” to show the two-thirds bonds capacity for the current year. As for timing, a unit is not going to be able to use two-thirds bonds in the current year for the referendum projects on the ballot. Moreover, certain projects that are the subject of referendum bonds are not allowable purposes for two-thirds bonds. Unfortunately, two-thirds bonds are nuanced enough that they cannot be captured effectively in a short disclosure statement designed to help voters decide how to vote on a referendum and may detract from the statement’s overall usefulness.

This other statement emphasizes that the statement of estimated interest on the life of the bonds is just that – an estimate. If bonds can be issued in chunks over a long period of time, then today’s estimates of interest rates, debt service schedules and changes in tax base make today’s estimates even less accurate. How transparent are we by putting a lot of numbers out there that simply won’t be accurate? There is no feasible way to account for those changes before the project is put up for a referendum. If the unit does not issue the approved bonds right away, then is very likely the actual results will vary, which seems to defeat the purpose of this disclosure. In reality, establishing these estimates before a public hearing, with a ten-year potential to issue bonds, and over a possible 20-year maturity for the bonds, we’re making assumptions about interest rates over ten years and the local tax base over 30 years. That’s a lot of time to account for!

Challenges to the Bonds, Notices, and Fixations

The statute then also includes two more items to note. There is a safeguard for local governments acknowledging the bond order is not subject to challenge simply because the bonds when issued, may have a higher interest rate or effect on property taxes than was initially estimated under the assumptions in the disclosure. Second, the disclosure must also be filed with the LGC, posted online, and maintained by the clerk of that local unit.

Precluding a constituent from lodging a challenge because the results did not match the initial estimates protects local governments somewhat in their decision-making. However, there are considerations such as allegations that the assumptions used were not “reasonable” or public officials were knowingly flat-out deceptive in their estimates. These scenarios would potentially keep a challenge to the bonds on the table.

Posting the disclosure online for the public does vaguely move the needle for increased transparency in the early stages of the bond referendum process. Although, it does allow for voters to become fixated the amount of interest they believe the bonds will have. As humans, we are prone to the anchoring effect (defined here); when we see one number [in the disclosure statement] and are provided another [at the time of the bond issuance], our fixation on the initial estimate may lead to discontent if the final results do not match. However, if this information is not presented on the ballot question in some form, is this really any more transparent?

Finale – Where We Are and Where We Could Go

The main point of this post was to highlight the difficulty in achieving reasonable transparency without leading voters astray. We already calculate total interest for the statement of estimated interest based on assumptions, which hasn’t been too perplexing. Adding in “reasonable” assumptions, estimating property tax increases, and trying to deal with two-thirds bonds capacity into that disclosure puts more on a finance officer’s plate while public access to information about a bond referendum, in our view, only marginally improves.

More information can be regarded as a plus, but we should also be mindful of information overload. If the public becomes hyper-focused on estimates, it’s possible the main purpose of the bonds is overshadowed. Then we have the danger of the anchoring effect, which could affect the integrity of the referendum process. There’s also the threat of repercussions to elected officials, if assumptions turn out wrong, even if they were valid when made. Unfortunately, those assumptions, even at the time they are made, are more fluid than they are concrete.

SB 265 appears to have laudable goals of more information and transparency for voters. Who could argue with that? However, it could use some refinements and local units will need support from the LGC through the administrative process. As it stands, the bill does not hone-in precisely on what information it wants voters to receive that might be useful. Perhaps there needs to be further discussion as to what information the sponsors of the bill really want to communicate. We’ve outlined some questions and details above that could be refined.

If the bill were to pass in some form, we’d urge the LGC to act through the administrative process to provide standard forms of the disclosure statement, additional guidance as needed, and safe harbors for finance officials. These supplements could take into account some of the informational ambiguities presently in the bill. With a few tweaks and some clarifications, SB 265 would be well on its way to making the bond referendum process more transparent for all voters.